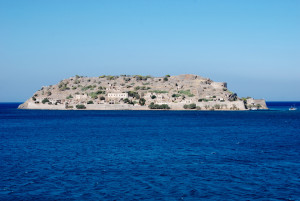 One of the day trips you could consider is a trip to Spinalonga.

The island of Spinalonga (Greek: Σπιναλόγκα), is located in the Gulf of Elounda in north-eastern Crete, in Lasithi, next to the town of Plaka.

Originally, Spinalonga was not an island – it was part of the island of Crete. During Venetian occupation, the island was carved out of the coast for defense purposes and a fort was built there. The island has also been used as a leper colony. Spinalonga has appeared in novels, television series, and a short film.

The island was subsequently used as a leper colony from 1903 to 1957. It is notable for being one of the last active leper colonies in Europe. The last inhabitant, a priest, left the island in 1962. This was to maintain the religious tradition of the Greek Orthodox church, in which a buried person has to be commemorated at following intervals of 40 days; 6 months; 1 year; 3 years; and 5 years, after their death.

There were two entrances to Spinalonga, one being the lepers’ entrance, a tunnel known as “Dante’s Gate”. This was so named because the patients did not know what was going to happen to them once they arrived.

Today, the uninhabited island is a popular tourist attraction in Crete. In addition to the abandoned leper colony and the fortress, Spinalonga is known for its small pebble beaches and shallow waters. The island can easily be accessed from Plaka, Elounda and Agios Nikolaos. Tourist boats depart from all three towns on a daily basis (every 30 minutes from Elounda). There is no accommodation on Spinalonga, meaning all tours last only a few hours. Boat trips from Plaka take about 10 minutes, from Elounda approximately 25 minutes while trips departing Agios Nikolaos can take almost an hour.

A visit to Spinalonga is very impressive when you keep its history in mind.